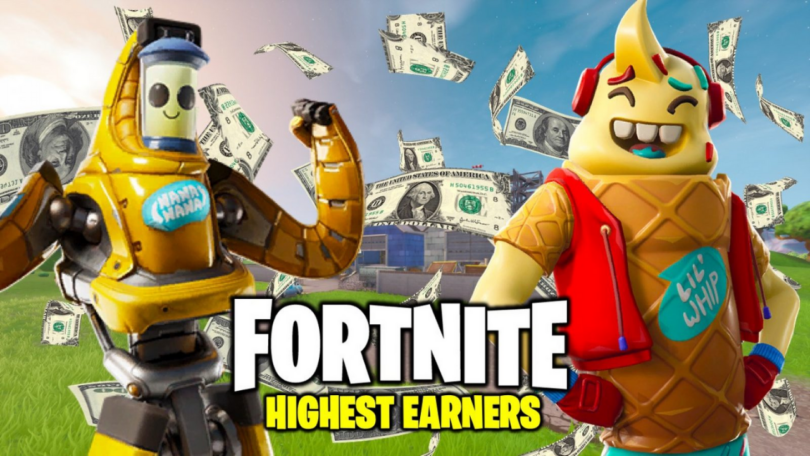 Top 10 Fortnite Earner: Nowadays, Esports is so much paid that players are growing their interests not only to play it but to make money from it, Fortnite influence is also increasing in Esports.

Fortnite is having a big audience who are so much helping the creators and streamers of Fortnite which help them to make money, they are highly paid for Esports, Partner Programs, Advertisements and mainly by Youtube or platform where they stream. So basically they are having a wide range of income.

Finding the earning of a gamer is so hard as their range of earning is so big like they earn from advertisements, partner programs, Esports and from games, etc, so we are having the list of top earners from Fortnite (by tournaments only). I have collected this data from the official Fortnite website, not from any fortnite earnings tracker.

Look here who is the best Fortnite player in 2021?

In top-earning Rocco Morales also known as Saf comes on number 10, He is an American gamer registered by Train H Esport. He is with a lot of talent he had won the 2019 Fortnite world match (duo) and many other world events and his total average earning is estimated to be $1,141,587.02. you can say that Rocco is the top 10th Fortnite earner in last year.

Williams Aubin is a 20-year-old Canadian Gamer also known as “Zyat”. He is representing NRG Esports. He began to compete in the Fortnite Esports environment back in 2017. about his achievements, he had won ESL Katowice Royale (Duo). His total earning is approx $1,199,456.42. Isn’t it amazing but wait! We are having more gamers with more earnings.

Dave Jong is a British Gamer also known as Rojo (his gaming name), with a world ranking #84 in Fortnite gaming, by 23 tournaments he had earned $1,214,476.66. He represented Smash Gaming previously but now he is an independent roster who is looking for the next chapter 2 season 6 FNCS and content for his youtube channel and other streaming apps.

Nate Kou is a Chinese Gamer also known as Kreo. He was signed with luminosity Gaming and Lazarus Esports but now he is on an independent roster. He has been playing Fortnite since September 2017 when Fortnite was released. In July 2019, he came fourth in the Fortnite World Cup Solo tournament, winning himself $1,050,000 in the process. He had earned $1,216,159 from all tournaments.

Jaden Ashman is a 16-year-old boy also known as “Wolfiez” is an English gamer who represents Britain’s Excel Esport. He started working hard at only the age of 14 and you can say that he is the very first gamer to become a millionaire at the age of 14. He was the runner-up in the Fortnite world cup (duo). His earnings from tournaments till now are $1,337,778.07.

Emil Bergquist is also known as “Nyhrox” is a Norwegian  Gamer of Fortnite. He is 19 years old and he won the Fortnite World Cup with Aqua  (duo) and became the world champion. He has played around 10 tournaments and earned $1,537,945.

Harrison Change is a Former American Fortnite Gamer, 26 years old. He was the runner-up of Fortnite world championship (solo) division 2019. When he was an active player of Fortnite he was representing counter logic gaming but now he is shifted towards valorant to make his future leads in gaming. From more than 53 tournaments Psalm managed to earn USD 1,873,138.80. isn’t it a big amount! It is a big amount. So he was our 3rd biggest earner from Fortnite.

So here is our 2nd biggest earner and his name is David Wand and also known as, our all favorite “Aqua”, so Aqua is an Austrian Gamer who previously played for Coller Gaming and now he is not playing for any team because he is banned from the community.

He is one of the most famous streamers of Fortnight but he lose all his respect because of the cheating in a local tournament, he was stream sniping in the semis of that tournament but as we talk about his earning he had earned $1,926,974.26 from the tournaments which he had played.

Kyle Giersdorf is an American Gamer, better known as Bugha. He came better in fame after winning the Fortnite world championship 2019, he is the richest Fortnite gamer in the USA as well as of the whole world he has in total earning of $3,159,595.05 and this huge data make hi, the richest player of Fortnite.

The top earner in 2021:- Here also the name will be the same Bugha is the player who had earned more in 2021 than any other player he had earned an estimated $35,600 per month in the year 2021 which is much if you state only about money by tournaments so we can say he is the best player in 2021